Daniel Sandars CC, a Toastmaster at Cranfield Speakers (http://cranfield.d71.org), and his wife Stephanie took a night out from their family holiday on the Island of Gozo in Malta to visit Toastmasters Malta (http://tmmalta.tmclub.eu). Daniel has a very emotional relation to Malta where he gave an eulogy speech for which Toastmasters helped him prepare. His visit might trigger Malta chartering its first club and potentially becoming one of the countries joining D59 in the future. 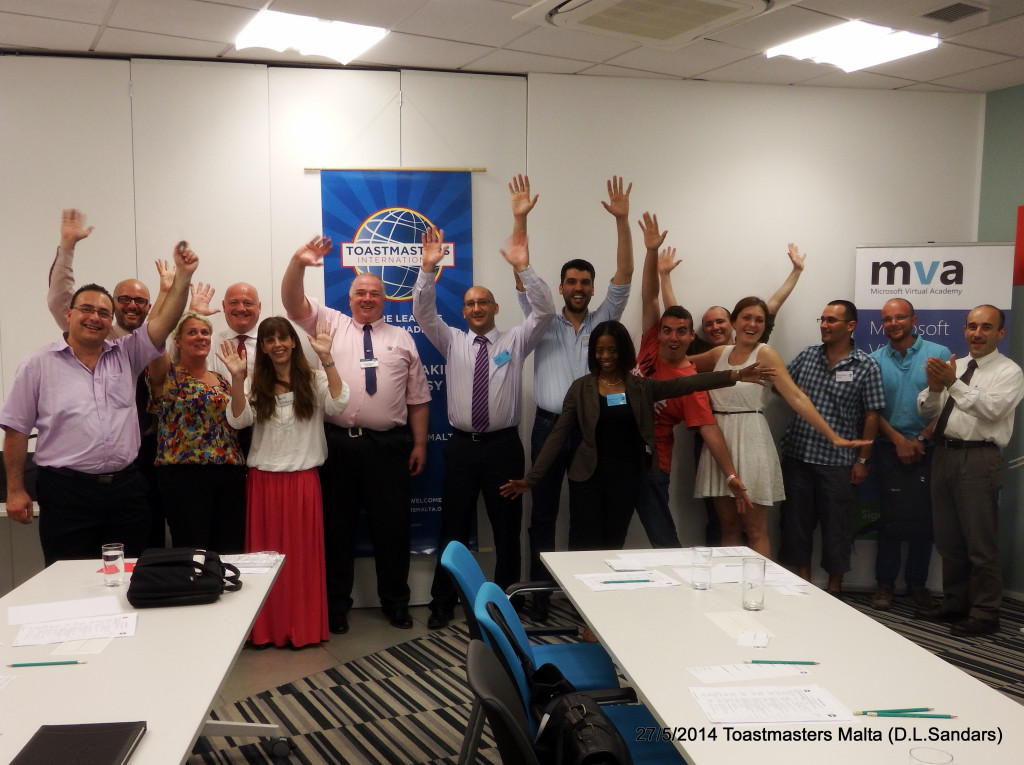 I. Visiting Malta and Malta Toastmasters

My family and I went to the Island of Gozo in Malta to visit my expatriate retired mother for our holidays in late May. In 2011, I had joined Toastmasters International on the Cranfield University campus, where I work as a research fellow, because I wanted to be able to present my science like the best TED conference speakers. I am currently secretary at Cranfield Speakers (Vice president public relations elect) and also secretary at a prospective club Northampton Speakers.

Only in the last year, have my wife and I successfully managed to find babysitters in Gozo for our children, one of whom has special needs. Yippee we had a free night or two at last. I decided to look for a Toastmasters club and contacted the prospective club Toastmasters Malta (TM Malta), the only club in Malta.

President Mark Fenech got in contact immediately with a proposal to turn an informal practice night of four people into a full meeting to coincide with my visit because his members really valued evaluations from experienced ‘foreign’ visitors. Toastmasters Malta was established four years ago by Steve Holmes and they are within sight, with determined effort, of obtaining twenty members and chartering.

help publicize their club outside Malta and I also offered to present an educational leadership speech from the Successful Club series entitled Evaluate to motivate. My educational speech would go beyond the standard leadership speech to include the models and methods so successfully used at Cranfield Speakers. Cranfield and Northampton Speakers have already benefited in return from Maltese Nougat, Honey-rings and Christening biscuits that I brought back home with me.

The informal practice meeting of four people soon grew to 12 members with six guests. This meeting was held at the Microsoft Innovation Centre in the prestigious new Skyparks building just outside Malta’s international airport.

President Mark Fenech said during his evaluation of my speech that “Daniel’s educational speech ‘Evaluate to motivate’ came at the right time for the club”, The speech provided a method and set of very effective evaluation models that focused on content, structure and delivery set within the feedback sandwich CCRRCS (C=Commend, R=Recommend, and S=positive summary).

I also evaluated the prepared speeches of Martina Brtnická and Sarinca Janca entitled “Steal like an artist” and “Beware of our Brains” respectively. They were both project two from the Competent Communicator manual. I was impressed with the high quality of the speakers and the meeting in general. I hope they will charter soon!

A surprising pleasure for me was to meet up with Ivan Gauci at the meeting as a fellow guest of TM Malta. Ivan had been at guest at Cranfield Speakers during his time at Cranfield University.

He may well join now. That is proof of Toastmasters International global alumni potential, if ever it were needed.

II. Toastmasters skills and the circle of life: skills for mourning and an eulogy speech

Returning to Malta and visiting TM Malta as they build-up towards chartering was like a personal pilgrimage, a part of my circle of life. Four months after I joined Toastmasters my father died in Malta, his adopted home. I was hurled, as the eldest son, into a position where public speaking was needed to read from the bible and present a personal eulogy. Toastmasters gave me the skills to cope and lead my extended family in mourning. Now, I had gone back to Malta to give my skills to help fellow Toastmasters.

Those early Toastmaster public speaking skills afforded me a proactive role in mourning my father, enabling a constructive closure and resolution of my grief. I was able to lead my brother in reading from the bible over the coffin at the funeral. Furthermore, I presented my personal eulogy to my father first at Cranfield Speakers, as Competent Communicator project three, and then at a memorial reception for my parent’s United Kingdom based family and friends in London.

My eulogy speech in London resulted in an immediate invitation, expenses paid, to present that eulogy again at a planned fund-raising memorial garden party at my parent’s home co-hosted with my father’s fellow Rotarians from the Rotary Club of Gozo. The event was a success, raising over 9,000 euro and receiving widespread news coverage in Malta. Last year the memorial fund endowed the hospital in Gozo with a state of the art heart monitor. Today lives are being saved and personal losses have healed due in part to the skills afforded me by Toastmasters. 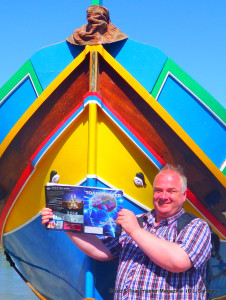 > You can read Daniel Sandars personal eulogy to his father on his blog site: www.quests.bluedance.org.uk/2012/02/my-father-a-personal-eulogy/

* When abroad visit a Toastmasters club and tell us about your discoveries in our “Toastmaster Visitor series” – contact: pro@district59-toastmasters.org

> About Andrew Philip Sandars’s memorial (in the press)

The private funeral in Gozo followed by a private memorial reception in London raised £3000 (about 3750 euro). My father’s fellow Rotarian friends in the Rotary Club of Gozo (http://www.rotarygozo.org/) joined forces as shown in these two press releases:

“A Summer Garden Party was hosted recently by Pauline Sandars at her farmhouse in Xewkija, as a tribute to her late husband and to provide funds for the Philip Sandars Memorial Fund.” http://gozonews.com/24448/summer-garden-party-held-in-gozo-raises-e9000-for-charity/

“It looks tiny but is has a huge potential to save lives. The Dash 4000 Heart Monitor was donated to the Gozo General Hospital at a special reception hosted by the Sandars family at their residence in Xewkija last Friday” http://gozonews.com/40162/philip-sandars-foundation-endows-gozo-with-a-heart-monitor/