Every year the District recognises Toastmasters members who have contributed through dedication and exceptional service with annual awards.

District Outstanding Toastmaster of the Year: This is typically awarded to a Toastmaster who is not a top District Officer, Division Director or Area Director, but who makes a significant contribution to the goals and mission of the District.

Area Director of the Year: This award recognizes an Area Director whose dedication, commitment, and area team significantly contributed towards achieving the district mission. The nomination form gives you an idea what Toastmasters expects from a good Area Director. Nevertheless sometimes it´s not only the statistical performance which makes the difference and adds to the District´s success.

Division Director of the Year: Given annually to the Division Director with the most outstanding performance in membership building and retention, club extension, education/training, leadership and other areas critical to district success.

Recent recipients of awards are listed below. 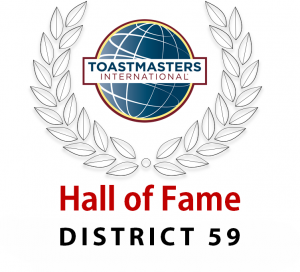 Toastmaster of the Year

Area Director of the Year

Division Director of the Year