On LinkedIn’s Official Toastmasters International Group the YLP query asked for ideas on the final, eighth session. Each final session differs from another. Asking other District 59 YLP Coordinators about their experiences, opened a new experience on this District 59 site.

What the Teens Did in Paris
The first Paris YLP’s final session 2017 consisted of two make-up speeches, the Table Topics contest, a Tongue Twister contest (with winner certificates) and a debate (3 historical characters in a balloon losing altitude-only one remains; who will remain). 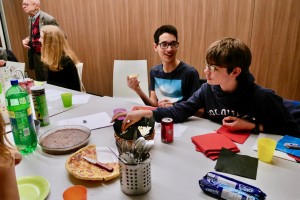 The after session “gala” was potluck supplied by the TM coaches and students. The library supplied sweets and beverages.
Discussions over the course of the meetings resulted in not inviting parents, even if a student’s parent was one of the sponsors.
“Where Leaders Are Made” ribbons were attached to each certificate, which the Presidents of part 1 and part 2 each signed.

Read more about the details in the “YLP Success Story” on Toastmasters 75’s club website.