UPDATE: The proposal has been approved by the Toastmasters International Board of Directors in August 2016!

NEW DISTRICTS NUMBERS
In the last Toastmasters International Board Meeting, the numbers of the new districts were assigned. They are:
– 59 District “B” (FR, NL, BE, LU, MC)
– 107 District “A” (ES, PT, AD)
– 109 District “E” (IT, CH, AT, BG, CY, GR, FL, MK, SM, VA).
You may find this information in the meeting minutes of 14th December meeting in www.toastmasters.org

Following instruction from Toastmasters International Board of Directors in August 2015 to districts 59 and 95 to set up a joint reformation committee.

The committee’s task was to conduct a needs analysis and develop a reformation proposal to create district structures in Europe that are:

The final report from the European Committee is now available here

During Executive Committee meetings in Nice and Budapest on February 6th, European Reformation Committee Chair Morag Mathieson presented the draft proposal for the reformation of our two districts during a joined streamed session. The draft proposal is the result of an intense exploration of over 20 possible options. On scrutinizing, most of them turned out to have too many disadvantages to be viable options. 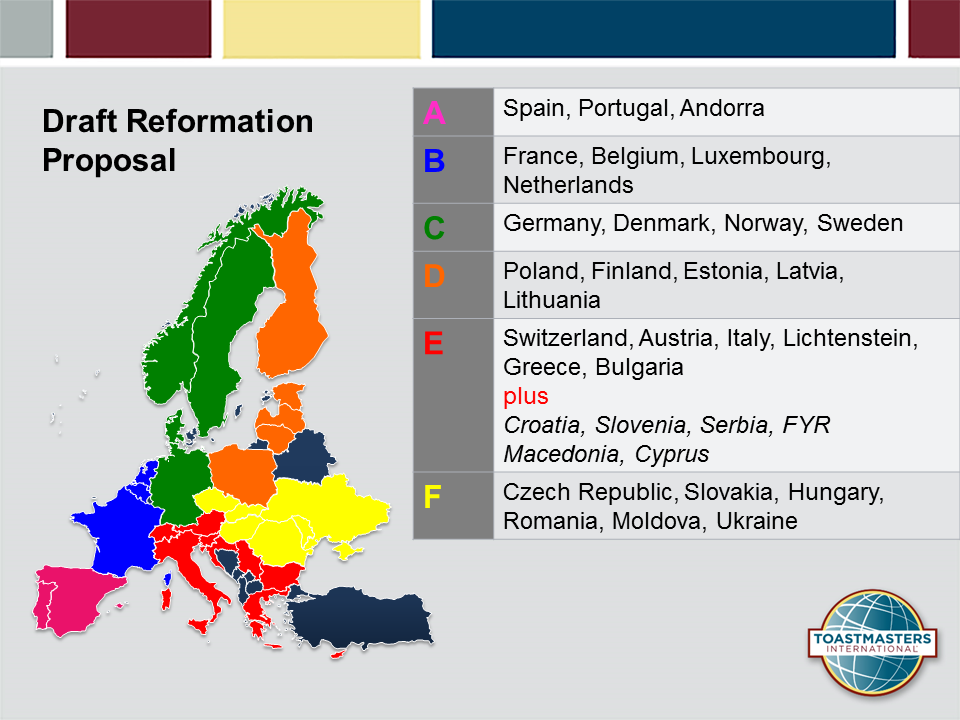 The draft proposal was open for discussion until March 19th. Until that date questions were sent to the committee and all questions and the answers posted in the FAQ section bellow. On behalf of the Reformation Committee, we thank you for taking the time to send questions and comments about the reformation process and proposal.

There were three webinars held in both Districts:

You can access the replay at the end of this page.

After March 19 the reformation committee will finalize the proposal and send it to the District Directors by April 2nd.

On April 16 the final proposal will be sent to all district council members so they can prepare for their vote at the District Council Meetings in May.

We invite you to send your questions and feedback to the European Reformation Committee and look forward to the final proposal being approved in May.

Timetable for Reformation of Districts 59 & 95

Why is reformation necessary?

Since district 59 was reformed in 2014 to create districts 59 & 95 the number of clubs in Continental Europe has continued to grow. This is great because it offers more people the opportunity to benefit from the Toastmasters program. However it also makes it more challenging for district leaders, including area and division directors, to support clubs and effectively fulfill responsibilities to individual members. At the same time the chance of taking up leadership opportunities may reduce and the costs of running the district increase.
In December 2015 D59 has 203 paid clubs and D95 has 229 paid clubs. Once a district has 200 clubs it can apply to the Board of Directors at Toastmasters International to request permission to begin the reformation process.
This approval was given in August 2015.

What factors does the reformation committee consider during the analysis process?

The Governing Documents of Toastmasters International details the following factors:

Who will be able to vote on the proposal?

The proposal will be presented to both district councils (D59 & D95) for their consideration. Only members of each district council: Club Presidents, VPs Education (or their proxy holders), Area & Division Directors, Administration Manager, Finance Manager, PR Manager, Club Growth Director, Program Quality Director, District Director and Immediate Past District Governor will be eligible to vote.

When and where will I be able to see the proposal for the new structure of Toastmasters Districts in Continental Europe?

The proposals will be presented to the district leaders at their meeting in February 2016 and after this will be made available on your district website for everyone to see.

What are the projected numbers of clubs?

How did you calculate the estimated numbers of clubs?

What languages will contests be held in in each of the proposed districts?

Districts can choose to hold up to 4 contests each year in a language other than English. This decision is made by the district director and has to be approved by the District Executive Committee. (Policy 6.0 Speech Contests)
Any decision about future speech contests would be made by the leaders of the newly created districts.

When a district is reformed, the district number is given to the new district with the oldest club in its boundaries. In district 59 the oldest club is Bossuet Gavaliers in Luxembourg and the number 59 will go to district B in the proposal.

The number 95 will go to district C because the oldest club in district 95 is Ramstein Speakers Bureau. The other districts would be assigned their number by World Headquarters by July 1st 2017.

Was it considered to create Germany, Austria and Switzerland as one district?

The task given to the reformation committee by the districts was to prepare a proposal that was in line with Toastmasters policy and would create districts that were operationally manageable and sustainable. In the process of reformation, new districts need to have at least 100 clubs which are geographically adjacent to each other.

The possibility of combining Germany, Switzerland and Austria in a single district was considered but encountered some challenges:

How did you consider financial feasibility?

Using the standard practice to calculate district budgets and the restrictions of expense categories a draft budget was prepared for each proposed district considering three situations: if no growth in membership occurred, if only 8% growth occurred and if the estimated growth is achieved.  The Budget Forecast District Reformation Proposal document shows the detail of this.

When we received notice of the planned dues increase in February we took a number of steps:
we spoke to the leaders of both districts to ask for their view on the impact of the increase and we looked at the impact of the last dues increase in 2011.
The last dues increase was in October 2011 and what we noticed then was that the number of dual memberships in the district decreased but overall membership growth was unaffected and club growth continued. Here is a link to the membership payment graphs http://dashboards.toastmasters.org/District.aspx?id=59&hideclub=1
The district leaders in consultation with the committee believe that because we calculated different growth rate options, even considerably lower than these countries show now, we will still grow enough clubs and members to create the proposed districts.

What happens if actual club & member growth numbers during 2016 and 2017 don't match the projections? Can the plan be revised? Does the whole process start all over again?

Once a district is in the reformation process, as we are, it is subject to periodic review by the Board of Directors. If the club and or membership growth were to deviate significantly they could change the proposal. However, it is unlikely that the whole process would begin again.

Toastmasters in Europe has been growing steadily for many years and this trend looks set to continue. District leaders in D59 & D95 recognized the need to offer a good support to clubs and maintain growth, whilst keeping the leadership challenge manageable. Supported by the Board of Directors, both district directors appointed a reformation committee to analyse the situation and propose future district structures. In this session you can find out more about the reformation and the work of this committee. Some members of the committee will answer questions and share information so D59 members are briefed on this development. 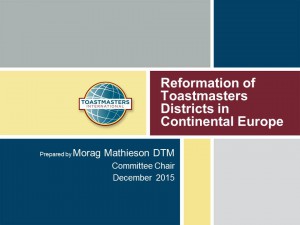